All joeys are beautiful creatures, but some steal your heart more than others.  Merrilyn had stolen my heart from the very beginning, and now Blossom was the second of the many joeys I had raised, that touched me just a little bit deeper. She had the same effect on Merrilyn. 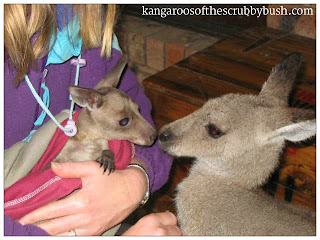 From the first minute that their noses touched, Merrilyn became her guardian.  In Part 24 I talked about this developing relationship and it fascinated me as my observations of the wild kangaroos on my property was that they did not readily take to each other.

The only solid relationships were between mother and joey, and once the joey was out of the pouch and fully weaned there was no longer any physical contact unless it was a cuff with a paw if the joey ventured back too close to its mother.  If a joey was orphaned it either survived by itself or died.  Only once have I seen a wild mother take on a joey that was not its own, and all it allowed was the joey to stay reasonably close and that seemed enough to enable that joey to survive. 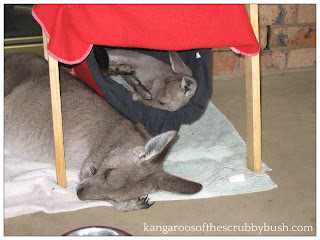 So why did Merrilyn feel the need to be so close to this new joey?  They had come from the same area so perhaps they shared a father and something was telling them there was a connection?  We'll never know, but it seemed wherever Blossom was, Merrilyn was in the background. 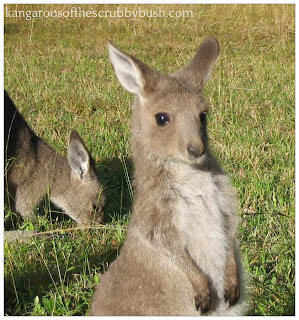 You may recall from Part 24 that Blossom had managed to injure her toe.  She spent a good of time in her pouch recovering and Merrilyn was generally on guard. 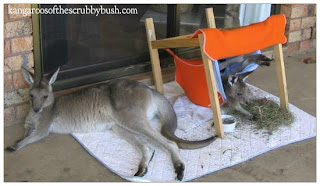 The other member of the Three Musketeers who also seemed besotted was the lovely Bonking Bob.  He too spent time on guard. 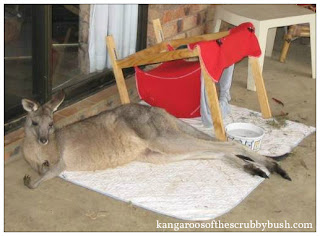 Those who read last week's post will be pleased to know that Bob was ever the gentleman with Blossom so no issues there.  Once the toe healed the two girls started to roam again. 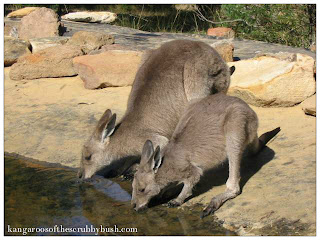 Drought was a real problem and our frog pond was becoming a frog puddle!  The rocks in the background show where the water level should be. 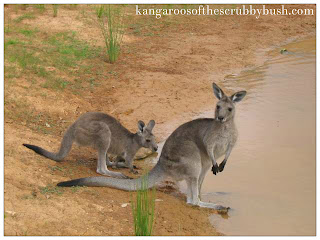 The dam too was disappearing.  I was asked whether kangaroos can swim.  They certainly can, though they seemed to prefer to simply wade in and then out to cool off in the heat.  All the kangaroos, wild and released, were extremely grateful for both the frog pond and the dam during these hard times.  Times were good too as Blossom had recovered and continued to grow, and Merrilyn, Buster and Bob were living free and surviving.  I only hoped the good times would last and that rain would come.