Remember our third musketeer, Bob? Poor Bob was a problem child from the day he arrived, (Part 11), firstly rebuilding his health, and then his foot in mouth issues, (Part 14) and then being stung by bees, (Part 16), but you simply couldn't help loving him.  Bob was a character!

The three of them, Merrilyn, Buster and Bob, were always together. 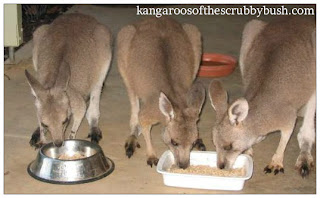 That's Merrilyn on the left - never one to share..., Bob in the middle and lovely, gentle Buster on the right.  Though, as you know from Part 21, the joeys had now all been fully weaned from their bottles, at this point we were in the grip of a severe drought and so we offered them supplementary goat pellets to help them through. 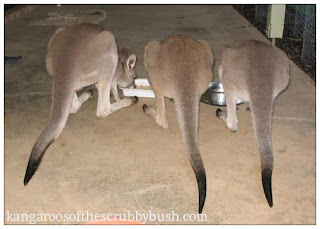 As well as The Three Musketeers, they were also affectionately known as The Three Bums! Bob still in the middle and never as healthy looking as the other two. 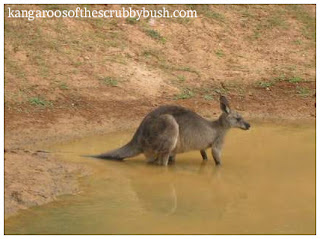 Bob loved the water.  Here he is in our dam.  On hot days he loved to soak himself to cool off. 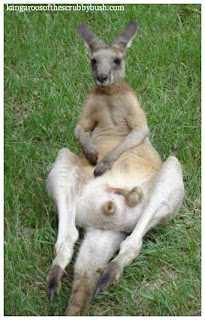 He also loved to lay on his back and well...have a scratch.... He and Buster were always together and then one day we spotted something quite extraordinary 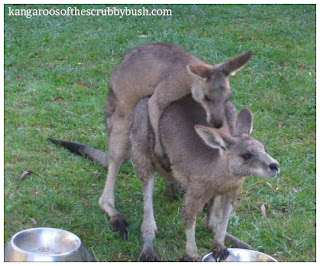 We knew Buster was one of the sweetest, most gentle kangaroos we'd raised, but that he was putting up with this was quite something and what was Bob thinking?? 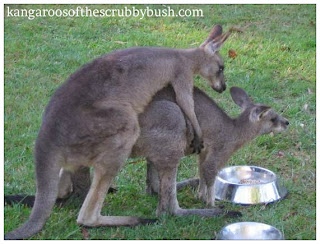 Fortunately Bob wasn't actually making real contact, and we're not sure even lovely Buster would have put up with that!  All Buster did was stop eating his pellets and wait patiently for the urge to be worked out of Bob's system. 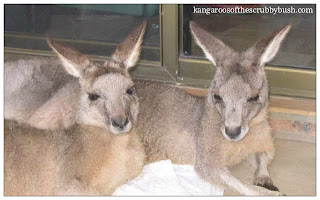 Despite Bob's very inappropriate advances to Buster, they remained firm friends and we are not sure what Buster whispered in Bob's ear but this occasion was the only one we caught sight of such behaviour and Bob moved on to bonking the patio furniture and anything else that stood still long enough!
So from that day on he was affectionately known as Bonking Bob!

Want to make sure you don't miss my posts?  Sign-up to have them delivered by email by popping your email into the Subscribe Via Email box in the right hand column here.  You can also join in the fun on facebook.
Email ThisBlogThis!Share to TwitterShare to FacebookShare to Pinterest