I lost two weeks of my life and then struggled for several more weeks to regain my health.  Oh I recall some parts of it, but mostly I was in a dream. Totally delirious for several days and then struggling to be human for the rest of it.    Sadly it was down to George.  When I'd put my hands beneath the sheets to say goodbye, I'd been covered in his bodily fluids.  Though I'd immediately washed, it was too late.  I had been infected with Q Fever.

I'd heard of it, but had no idea that I might become infected.  It took several weeks to be properly diagnosed because, despite our suggestion that it might be Q Fever, two doctors refused to consider it and treated me for other things.  At last I was able to see my own doctor who trusted my judgement and ran the test and finally proper treatment was started. The delayed diagnosis meant a longer recovery time and higher risks.  It can be simply like a mild flu but the worst cases see liver and heart damage and some people have died.  Thankfully I made a complete recovery, though I felt weakened for quite some time.

People who take on wildlife care often have no idea of the dangers.  You certainly think of being bitten or scratched but not that you could gain a disease that can be extremely debilitating.  Would it have stopped me if I'd known more about it?  Probably not.  Though whenever I have an opportunity I ensure potential and existing carers know the dangers.  Immunisation is available and you cannot work as a vet or a worker in an abattoir without it here in Australia and anyone who has had it goes on the register of notifiable diseases.

Meanwhile the mob continued to flourish and Merrilyn learned a new trick.  Though free to go wherever she pleased, she continued to see our house as her domain, as well as the bush.  We had an old cane sofa out on the patio and we were totally amazed to look through the window and see this sight one day. Somehow Merrilyn had made her way onto the couch! 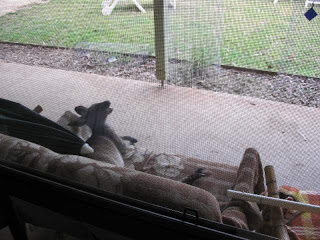 I took the first shot through the window as I thought she would get down and go when I went outside.  Not a bit of it. 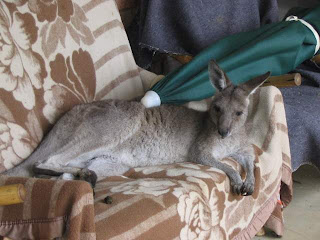 She was comfortable and wasn't moving for anyone.  I was also a bit miffed to notice she had dropped a pellet (hmm maybe I should just call it what it is - poo) as she had got up.  You can see it bottom left sitting like a round ball of .... near the edge of the sofa. 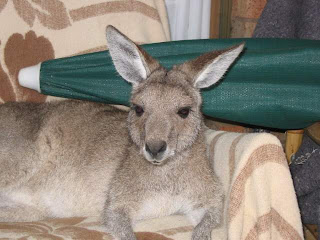 I'd like to think she was looking a bit sheepish, but I rather think she was simply wondering what I was doing.  She had never been on furniture before, not even when she was a small joey.

Though we discouraged her by leaving various objects on the seats, Merrilyn mostly found her way around them.  For an animal with large back legs that are used for hopping, not climbing, she was amazingly agile. On one occasion she even made it onto a single chair, even though we'd left the beach umbrella across it. 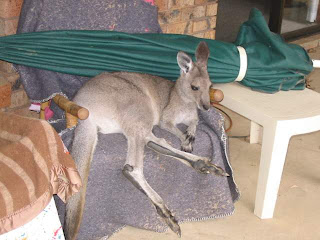 17 months after arriving in our lives, it became very clear that even though she was totally free to go, this particular kangaroo quite liked the comforts of a human home.