Fancy a Date with a Devil? 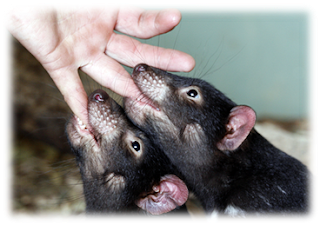 Not long ago my phone rang. It was related to wildlife care.  That's not unusual.  As regular readers know I have several years experience in wildlife care and have written a macropod (kangaroo and wallaby) care manual called Macropology. However this call was different.  This wasn't the usual "I have a kangaroo with xyz symptoms, what do you think?" call.  This was a man with a vision and a passion I haven't heard in quite some time.

Greg Irons is the very proud custodian, (owner doesn't seem quite right), of Bonorong Wildlife Sanctuary.  Bonorong is in Tasmania, Australia and the animals there are either being rehabilitated to be returned to the wild, are part of a breeding program or, due to being unfit for release due to permanent injury, are living out their years in this beautiful place.  You'll find kangaroos, wallabies, koalas, wombats and all manner of creatures Australian, including the fascinating Tasmanian Devil.  The photo shows Dougie and PeeWee, two orphaned devils being raised at Bonorong - thanks to Mike Calder for this wonderful photo.

Greg not only runs Bonorong, he trains wildlife carers and rescuers and has created the first wildlife rescue service in Tasmania.  He now teaches Animal Studies Certificate II for the Tasmanian Polytechnic and that was the reason for his call.  He wants to integrate some of Macropology into his training and I readily agreed.  It always makes my heart sing that there are people like Greg and his staff and volunteers out there working hard to ensure creatures other than we humans have a space in this world.  Greg's story will make a book one day.  He first visited Bonorong as a seven year old and declared to his mother "One day I will own this place."  How many seven year old's actually grow up to fulfil their dreams? Greg is one of those unique people - someone who actually does what he says he will do.

The Tasmanian Devil is in trouble.  It is being afflicted by a highly contagious facial tumour and may become extinct.  This site, Save The Tasmanian Devil offers detailed information.  Our discussion about the devil lead to The Tarkine, where devils, free of the tumours have been sighted.

I mentioned my wish to one day visit The Tarkine, to perhaps even be married there, at the bottom of one of the magnificent trees. (Yes there's a story...I'm engaged!).   The Tarkine is an awe inspiring, world heritage value wilderness in north west Tasmania.  The Tarkine National Coalition is working hard to save the forest and you can see further photographs and learn more there. (Don't miss Tom Mead's absolutely gorgeous photo of the Arthur River Rainforest). 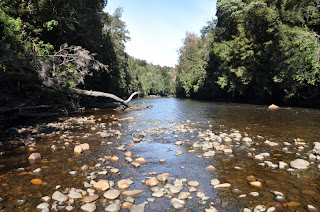 This shot of The Tarkine is Greg's - thanks again Greg.

You might also like to check out this video to see what is happening and to lend your voice to save The Tarkine. Don't Mine The Tarkine Campaign.

So please.  Sign-up to help save The Tarkine and the Tasmanian Devil and come and visit Bonorong and see the wonderful work of Greg and his team.

And yes, I'm getting back to this blog.  I've been away for a while, but there is much still to tell about Merrilyn and the gang. 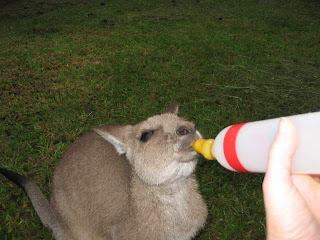 We had reached part 21 - Last Call for Bottles if you'd like to refresh your memory, or maybe start from the beginning if you are new here - Merrilyn's Story and I may just keep you informed of the wedding plans and whether we do make it to the bottom of a Tarkine tree for our special day.  Until next time...
Email ThisBlogThis!Share to TwitterShare to FacebookShare to Pinterest