Time flies by in this life.  It has for me lately with blog episodes not being delivered on time, sorry, and it did for the growing joeys too.  One minute Merrilyn was a fur less, helpless joey dependent on me for everything and suddenly it was the last night she would ever spend in her pouch! 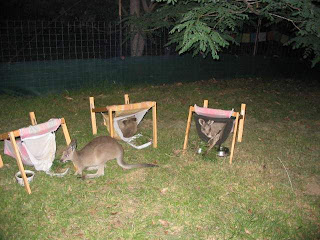 In fact her last night was the night before this photo was taken.  The joeys had been outside now for weeks.  Initially they had their freedom only during the day, but now they could also come and go at night.  They only had their pouches at night and it was time they left their pouches behind.
In the wild, eastern grey kangaroos spend roughly ten to twelve months in their mothers pouch.  Buster and Bob had been able to spend much longer as we were releasing all three together and Merrilyn needed to catch up.  It was Merrilyn who eventually led the way.  She was always the strongest of the three, despite her younger age.  She had let us know that it was time, spending less and less time in the pouch.  This last night of the pouches I left my bed several times and every time the two boys were tucked up inside their pouches whilst Merrilyn stood guard beside hers.

Buster, by far the oldest, was the most attached to his pouch. 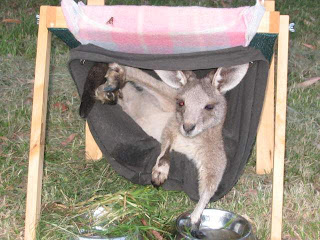 By now he could barely fit inside.

When I told him this was his last night - he was not impressed! 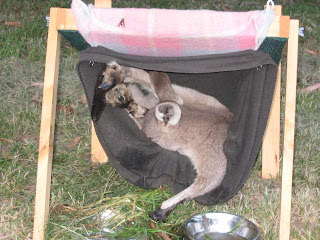 Oh no - losing my pouch?  Please no.
And so the very next day the pouches were taken away for the very last time.
And so the little band of musketeers... 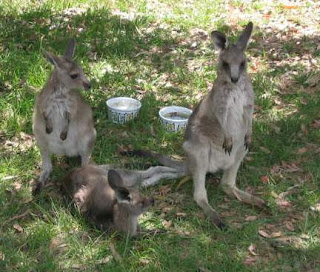 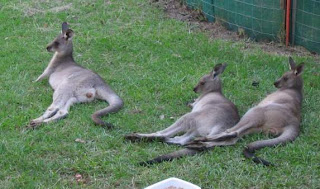 Buster left, Merrilyn and Bob.  Now living permanently outside the safety of the fenced area.
They were still having a daily bottle and some pellets. 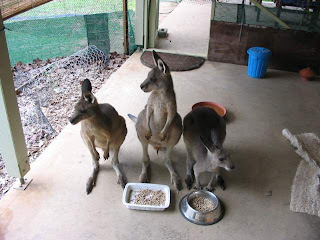 (Excuse Buster rolling out the lipstick in this photo - male kangaroos are excited by females and food!)
Soon it would be time for the final bottles and their real move for self sufficiency back in the wild.
Until next time!
Email ThisBlogThis!Share to TwitterShare to FacebookShare to Pinterest