Bob back in trouble - Merrilyn Part 16

If this is your first time here you can start this tale from the beginning here.  It's the story of Merrilyn, and her kangaroo friends.To my regulars, many thanks for all your comments, to new followers many thanks too and I will be round to join you and thank you soon but am just managing to keep the posts going whilst being very time poor at the moment.  A short post today as the story continues.
Poor Bob - never a dull moment for him!  Thankfully Merrilyn and Buster are all good news.  Merrilyn showed no signs of any ill effects from her overnight adventure, (Gone in a flash), once she over came the tiredness, and though Buster ended up with a slightly crooked foot (What else can go wrong and Foot and mouth disease ) it wasn't slowing him down. 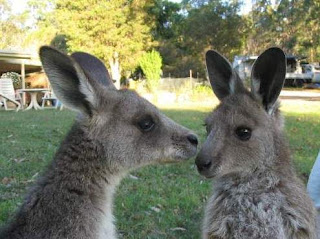 Buster on the left and Merrilyn on the right - firm friends and growing fast!
However Bob continued to get himself into trouble.  It was clear from the outset that this little kangaroo, either from genetics, or his early experiences, wasn't going to turn out to the be the brightest star in the sky.  We're still not sure exactly what happened.  One morning I looked out and somehow Bob looked different.  (I think if you have been following this story you'll see the clear differences between the kangaroos - they do look different and I can tell them apart).  Anyway I raced out and sure enough Bob did look different. 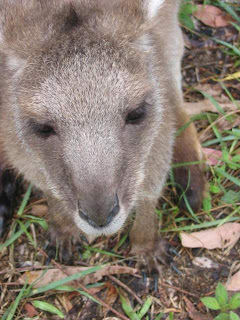 His little face was all swollen.
He was breathing fine and his eyes were fine and I kept my eye on him until he returned to normal.  I suspect one of two things - bull ants - we have some of the nastiest ants in the world in Australia and I find they can be one of the most painful things to be bitten by and I was put off my feet one day when trying to find a joey when I stepped on not one, but two, bull ant nests in quick succession and my ankle was swollen beyond belief.  The other alternative was a wasp or hornet or some kind.  Either way he had taken a close investigation of something that nature should have told him to leave well alone!
All's well that ends well.
Until next week.  Take care of the animals!  Cheers Cheryl
Email ThisBlogThis!Share to TwitterShare to FacebookShare to Pinterest