Yet another problem child - Merrilyn Part 13

Just 3 days after Bob arrived in care, (The Third Musketeer) yet another bundle arrived in our life.  I'd taken on the role of Macropod Coordinator for our local wildlife care group, which means it was my responsibility to stabilise new kangaroo and wallaby arrivals.  On this particular day I was contacted by our local police saying they'd had a joey dropped into the police station and could I come and take it away please.

I headed down there and found a female red-necked wallaby, yes like Pepe and Joe ( What's a Wallaby) .  She was over one kilo (2.2lb) and well furred.  I estimated she was about 7 months old and her mother had been hit by a car.  I was surprised she had made it into care as at that age she was well able to run from people and it worried me that she may have some injuries.

I couldn't find anything obvious but she struggled and was difficult to try to feed, so as she should have been nibbling on vegetation by this stage I decided to give her rest and quiet and see what would happen.  Most of you have probably used a playpen along the way (or are they considered a no no for kids these days?)  Well they come in handy for joeys who are reasonably mobile and that you don't want to mix in with the rest of the joeys in your house. 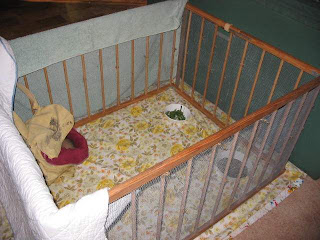 The normal bars are encased in soft mesh so that the joeys can't just walk through them and towels and sheeting give them a sense of added security and privacy.  Copper, as we named her, curled up in Merrilyn's old pouch and fell asleep.  I gave her a few hours and then tried some more rehydration fluid.  She seemed very flat but I managed to get a small amount into her and suddenly she was fighting me.  I left her to rest some more and this process continued for a couple of days.  She lost some weight and seemed to have some colicky type pain which I treated and hoped that it was the dietary change and loss of her mom and not internal injuries.

A week went by and suddenly both she and Bob seemed to turn a corner together.  I'd been struggling to get his poo problems under control and he was well under weight but one morning they had both put on weight and Copper hopped out to take a look at her new world.  She was a delight! 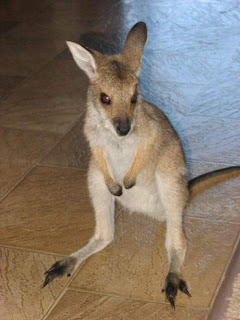 She hardly stopped moving so capturing her on film was quite a feat. 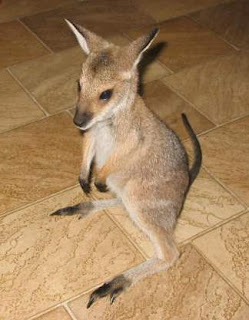 Two days after these photos were taken she went missing.  I got up in the morning and there was no Copper in the playpen.  I couldn't believe that she could have escaped the house without us noticing and so I carefully checked every nook and cranny in the place, but no Copper.  I could not imagine where she could be.  The three musketeers were all heads out and looking for their morning bottle so I started to get them ready and when I turned around to give Bob his bottle I couldn't believe what I saw. 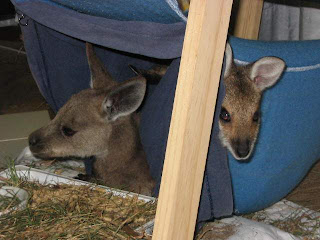 Perhaps she wanted company, or perhaps she sensed that Bob was struggling and needed a friend?  She wasn't actually directly in the pouch with Bob, but had somehow found her way between his pouch liner and the pouch.  She was obviously warm and happy and looking for her bottle too!

As much as I would love to have added Copper to the gang, between 3 demanding kangaroo joeys and Pepe and Joe, plus stabilising new joeys coming into care, I didn't have enough time to keep Copper here and after a few more days she was taken to another carers place for final feeding up and gentle release from their home back into the wild.  It's a beautiful property, with many red-necks and somewhere Copper will feel right at home.  I'm still amazed that she was in with Bob and also amazed she jumped out of the play pen so easily - at least we knew she was fit and strong!

As for Bob - well here he is at the end of his first week here.  Still scrawny but looking a bit better and with his systems settled slowly gaining weight. 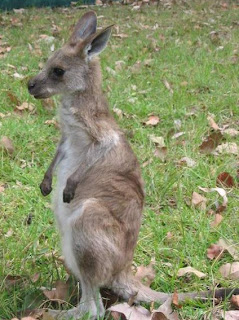 OK before I go I want to point you to a new page I've put in Hopper Strategized.  This is an ongoing blog hop currently being co-hosted by Christin Vance of Mom Blog of Two Little Misters and Stephanie Greiner of Always Just a Mom.  It's a way to gain some more traffic and also keep your blog up front and centre on the Google engine.  All the details are on the page if you want to give it a try and I'm working my way through the people already on to to say hello.

Adding this post to Love Links No 15 - come and join in the fun!

Until next week.  Take care all, Cheryl
Email ThisBlogThis!Share to TwitterShare to FacebookShare to Pinterest