Things happen in threes.  Isn't that what they say?  It was certainly true when on the day after Buster broke his foot (What Else Can Go Wrong?), our third challenge arrived.

I received a call from a carer who was having quite a bit of trouble with a joey.  He had come to her from another carer and he was thin and suffering from severe diarrhoea.  She wondered if I would take him on.  His estimated age put him between Merrilyn and Buster and therefore ideal to create a group of three, something that would make their release much more likely to succeed.  She was honest that he had issues and so I gave it some thought.  I already had two red-necked wallabies in care but well on their way to being fully released,  (hmm must introduce you to those two one day), I was still watching Merrilyn for signs of myopathy from her over night adventure, and, of course, we had no idea how Buster's foot would heal and that also meant any new joey would be my responsibility.   Still he seemed like a good fit for the group and how much of a problem could he be?  I was shocked when he arrived. 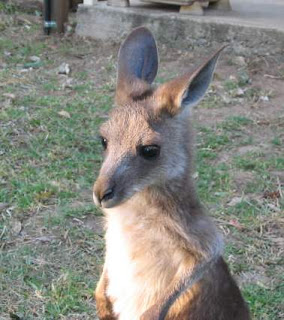 Meet Bob.  He was in very poor shape and his pouch - well, let's just say I won't forget the smell in a hurry.  The carer he came from was doing her best, but he was soiling the bag regularly and had done so between her place and mine.  I isolated him, but after looking at his feeding regime and studying the poo in detail, (one of the easiest ways to determine what kind of illness a kangaroo joey has), I felt his problems were stress and feed related.  I made some small changes as I was concerned a major immediate change could create more damage and created a regime to move him to what I thought might suit him better over the course of a week. 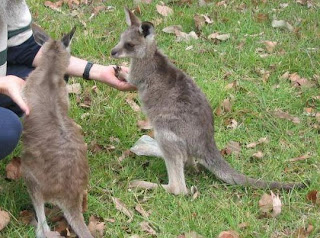 This is Bob with Buster, (on the right, with his plaster cast in its bag). Though there is little difference in their ages, you can see the difference between them and the photo really doesn't show it all.  One sure way to tell a kangaroos health is looking at their tail and Busters was thick and sturdy, but Bob's was much thinner.  We had some work to do here.

One good thing was Bob wanted to be friends with everyone.  Buster had been quite shy when he arrived, but Bob was happy just to be with other joeys and people, so he fitted in quite well, other than trying to keep him to his own pouch.  Ms Merrilyn was very precious about her pouch and liked it to herself and Bob thought it might be good to share.  A hiss and a biff and he realised that was not on.  As the day ended I wasn't sure whether to smile in happiness at having 3 joeys, all of such similar ages to be released in a group, or whether to wonder if any of them would make it to adulthood, especially Bob.

No point in doing anything other than smiling - the three musketeers were now united. 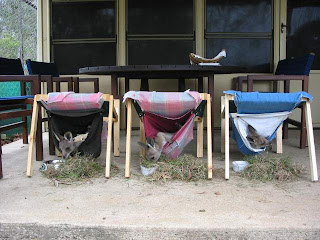 Buster, Merrilyn and Bob.
Do you want to read all parts of this story?  You'll find them all within the Merrilyn's Story page.

Also adding this post to the Free Fringes Love Links 13 - please hop over and check out this great meme.

Until next Friday when there is so much more to tell.. Have a great week, Cheryl
Email ThisBlogThis!Share to TwitterShare to FacebookShare to Pinterest