What else can go wrong? Merrilyn Part 10

It took Merrilyn quite a while to get over her overnight adventure.  (You can read Part 9 here if you missed it). She had sore feet for a few days and her poos turned black and runny.  She was understandably skittish and did not want to go too far away from me. 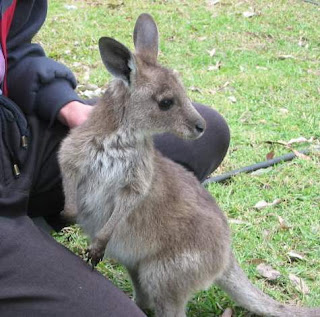 We resumed our walks, with a watchful eye out for any wild kangaroos that might pass by too closely, but we were all just a bit on edge.  Just nine days after Merrilyn's near loss, something else, unthinkable happened.

We were walking back up to the house and Buster suddenly took off.  Nothing unusual in that but he was heading straight for a rock retaining wall and he'd never jumped that high before.  Without thinking, Stephen called out "Stop Buster".  Buster complied but he was already in flight and he may have made it over the wall, but his sudden stop meant he smacked straight into it.  We raced over to him and he immediately tried to get up, but we could see that one of his hind feet was broken.

Stephen and I just looked at each other and then down at the break.  Male eastern grey kangaroos can grow to 66kg (145lb).  Having solid hind legs is critical to their ability to flee from predators and also to fight other male eastern greys.  They stand up on their strong tails and kick out with their legs. If the vet could not heal this break solidly, Buster would have to be put down.  Better that than a cruel death.  Buster had won our hearts quickly and tears welled into my eyes at the thought of losing him. (You can read about Buster's arrival here.) He was looking at us with such trust.

We moved quickly.  Securing Merrilyn in her pouch back inside the house and carefully lifting Buster into his pouch.  We raced to the vet who took an X-ray and declared, to our relief, that he thought he could fix the problem.  The break was down near his toe, not on the main part of the leg, which would probably have resulted in him being put down, and the vet thought a plaster splint might do the job.

We spent several hours at the vet surgery and eventually bought him home with instructions that he shouldn't run and to keep the whole thing dry.  Well the second was easy - we added a plastic bag around it (or, as we dubbed it, "Buster's condom").  Keeping him from running was going to prove a new challenge. 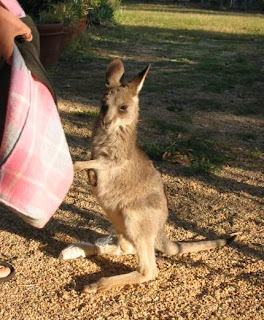 Somehow he was even more gorgeous with his foot in the splint! 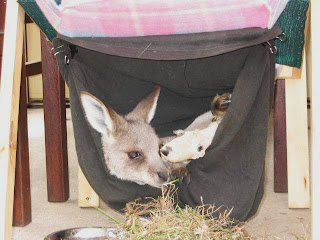 Buster also loved his pouch, (in fact he loved it more than any joey we ever had in care - possibly because he was denied it when he was young - perhaps he thought he'd make up for the lost pouch time!)

The question now - would the cast work?  Would the break heel properly and leave him with a strong back foot that could take him into adult life safely?  Time would tell.

If you've missed any of the other parts, just click on the Merrilyn's Story Link on the side bar and they are all there.

Thanks to the many of you leaving comments, sending emails, following here and joining the facebook page. You are all very much appreciated and I will be visiting, commenting and following you back and there's plenty more to come in this story.  More characters, more drama, more laughter and plenty of tears.  Enjoy.

Love to you all, Cheryl

Oh and am linking this post to Bee's With Honey's "Let's bee friends Friday" post.  We all need new friends! And having forgotten I'd linked it there I've also linked it to By Word of Mouth Musings Time Travel Tuesdays!
Email ThisBlogThis!Share to TwitterShare to FacebookShare to Pinterest