In One End and Out the Other - Merrilyn Part 3

You can't feed kangaroos any old thing.  Sadly some people find a joey, either when their mother is killed by a car, or when a dog chase separates mum and bub and they can't find each other again, and decide to take it home. This is great if they are going to hand it in to a trained wildlife carer or at least find out the right way to care for it, but it can prove to be a disaster when people just try to figure it out themselves, or worse, think they know what to do.

Most kangaroos and wallabies (together known as macropods - meaning "big foot"), are lactose intolerant, so normal cow's milk can cause them to become very ill and even die.  Fortunately, over time, good people have figured out the right formulas and they are readily available to wildlife carers.  There are several kinds of milk and the milk changes as the joey grows.  Amazingly female kangaroos can produce two different types of milk at the same time - one for the joey who is out of the pouch and hopping along at her heels and a totally different milk for the tiny furless new joey in her pouch.

The fact Merrilyn had been put on the wrong milk when first in care, (see Part 1), was one of the reasons she had been so ill when she came here.  Once we sorted it out Merrilyn loved her bottle! 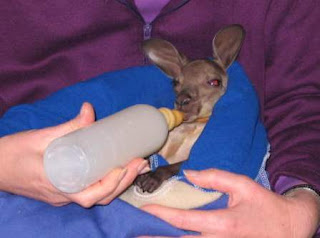 In fact it was hard to get her to let go of her bottle, even when it was finished. 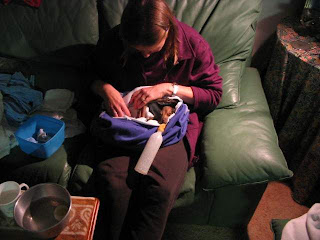 Little joeys also nuzzle at dirt and grass as their mothers graze and this helps their immune system to develop. 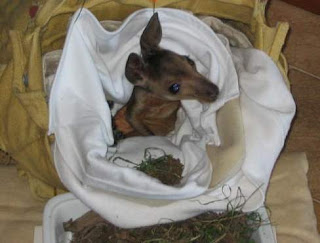 (I should have known what a character she was going to become by this photo!)

Initially Merrilyn was on 6 feeds a day.  Every 4 hours.  As she was ill she had medication in between feeds, so for the first three weeks I was up every two hours, twenty-four hours a day!   As they grow they move to fewer feeds but an eastern grey joey isn't weaned until it's between fifteen and eighteen months old.

So then you might ask about toileting - or "poo-ology" as I call it in my wildlife care manual.  This little joey couldn't hop yet and in the wild her mother would simply pop her head into the pouch and lick her joey's bottom, (or cloaca - pronounced clow, as in glow, aka, as it's known in kangaroos) and eat the results.  Now I loved Merrilyn instantly, but I wasn't going that far!

So when it comes to humans and kangaroos, you use a very soft, damp cloth, teased over the top of the cloaca and you catch and dispose of what results.  Joeys throw their legs up above their heads to expose the cloaca for their mothers and Merrilyn soon caught on: 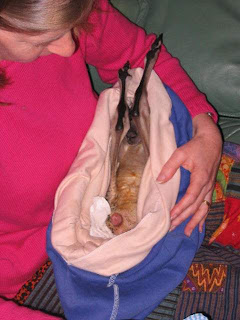 In fact she seemed to love it: 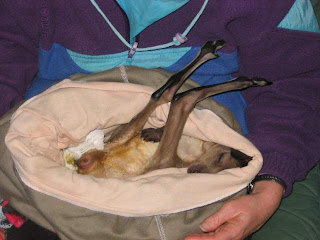 She'd stretch her legs up and then fall into a comfortable sleep whilst I did what was necessary.

Merrilyn clearly trusted me from early in our relationship.  She was so lay back, she was as horizontal as a kangaroo joey can be. 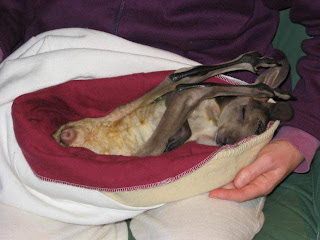 One of the reasons I write this blog is to highlight the other beautiful creatures we share this planet with, and the fact they deserve a home too and human clearing can see them disappear, which is so sad.   According to the latest statistics from WWF, globally 230 million hectares of forests will disappear by 2050 if we take no action.  Sadly my country, Australia is the only developed country to rank in the top 10 of net forest lost between 2000 and 2010, in fact we ranked number 2.  I'll be letting my politicians know I'm not happy about that!  You can read more here.

Episodes of Merrilyn's story will appear on this blog once a week.  Next time, meet Merrilyn's new big brother, Buster!
Email ThisBlogThis!Share to TwitterShare to FacebookShare to Pinterest