Funny how the ugliest things can bring you to the most beautiful places in your life.  Cancer bought me to my special place.  Factually a left breast mastectomy for invasive ductal carcinoma.  Emotionally the devastation of understanding that life is precious and may be ending far sooner than you think.  Even with survival the loss of something special and a body forever marred by the slashing that allowed it to continue functioning.
This isn’t a story about cancer survival, though clearly I have survived.  It’s the story of the wonder of nature and a very special relationship I developed with an eastern grey kangaroo, Merrilyn.  I’d lost my connection to nature, caught up in the thrill of a marketing career that saw me travelling the world.  Mine was a world of concrete and tarmac, roads, buildings, aeroplanes and airports, mostly devoid of nature, save ornamental palms in hotel foyers.  Merrilyn would be lost in such a world.  She would be terrified by it.  Perhaps we should be terrified too, as it is a world that does not sustain life.  We need nature to heal.
Merrilyn’s world turned upside down far earlier than mine.  She was roughly four months old when her mother was hit by a tonne of moving metal.  A vet, driving to work, saw the kangaroo hit by the car and stopped immediately.  It was clear the mother was badly injured and the vet put her into her car and rushed her to the vet clinic.  Sadly the only thing that could be done was to aid the female kangaroo to a painless death, but there was a chance for the 600g (21.5 ounce), furless joey tucked in her pouch.
The local wildlife rescue group was called and the joey was handed over to a carer who rarely looked after joeys.  The carer named the little female after the vet who had saved her life.  Merrilyn was lucky.  Her eyes were open and her ears were released from her head, so, though furless, there was a good chance she would survive.  Joeys are about the size of a jellybean when born.  Only their front legs are developed and these are used for the precarious climb from the birth canal up the front of the pouch and into its safety.  They find a teat and nature fuses them in place until they are much further developed.  The eyes are yet to open and the ears are still down and attached to the head.
If a joey is still fused to a teat when its mother is killed, its chances for survival and a healthy life are almost nil.  The chances increase as they grow.  The back legs develop.  The eyes open.  The ears release from the head, though they droop down for quite some time.  Merrilyn had passed through all of these stages.
The initial carer kept her for a little over three weeks and then I was called to take over care.  My property was an ideal release site for eastern grey kangaroos.  I was still fairly new to kangaroo care myself and so far had seen only failure.  I’d lost joeys to roaming dogs, a rare blood parasite illness and a horrid disease called coccidiosis.  I was wondering if I was really cut out to be a wildlife carer.  Even though I had done all I could for the other joeys, their loss cut deeply.
The day I picked up Merrilyn, she was tucked inside her man made pouch.  As I carefully carried her to the car she twitched violently.  The movement startled me.  I asked if it was normal, having never seen it before.  I was told it was.  It wasn’t.
I’m a researcher and had done quite a lot of reading about eastern grey care before taking on any of the joeys.  I looked at the number of feeds and the formula the joey was on and I knew both were wrong for her weight and development.  It was an error that can easily be made.  Someone had muddled the weights with that of a wallaby.  A wallaby of the same weight would have been much more advanced and the formula and feeds would have been correct, but they fell well short for an eastern grey, the poor joey was hypoglycaemic.  She also had thrush.  Thrush is stress related.  It might have come as a result of the loss of her mother, the incorrect feeding regime or the change in carers.  Eastern greys don’t like change and this poor little joey had seen too much in its short time in care.
I wasn’t sure that she would survive.  I spoke to several carers that I knew who had considerable experience in this area.  I read whatever I could find.  For three weeks I had her on a strict regime.  I either fed or medicated her every two hours, twenty-four hours a day for the whole three weeks.  The twitching soon stopped and slowly the thrush disappeared and I was finally brave enough to take her photo.  Little Merrilyn was a fighter.  She was going to live. Merrilyn was a survivor too. 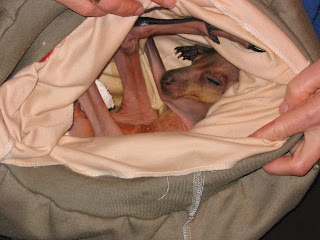 I've now added this post to Nicola's Time Travel Tuesday.  Do please go and give By Word of Mouth Musings some bloggy love!
Email ThisBlogThis!Share to TwitterShare to FacebookShare to Pinterest