Can you imagine making love for six hours?  I don't mean half an hour of exertion and then a two hour sleep and then go again, I mean six hours of the actual act?  Well this little guy can, and he might even manage it several times!  However at the end of the two-week mating season every single male is dead! 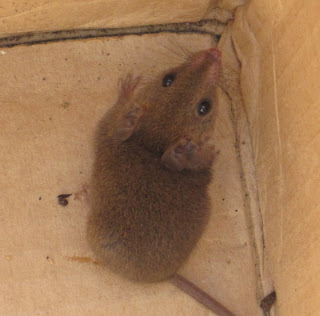 This is a brown antechinus (ant-e-ky-nos).  He is an Australian marsupial, in other words the female has a pouch which carries the young, and he is carnivorous.   You may recall me writing about the phascogale, another carnivorous marsupial from the same family.

I found this one, and six other members of its family in one of my sheds.  I'd heard the telltale rustlings and thought a rat might be the culprit.  I set my live catch rat trap, (I catch things alive in case they are the good guys that can then be released) and the trap didn't go off.  That's because an antechinus isn't interested in pumpkin seeds and peanut butter (much more effective for rats than cheese!).  This little carnivorous chappy lives on beetles, spiders, cockroaches and those other insects we'd prefer not to have crawling around us.  He'd be a perfect guest if he could only be toilet trained! 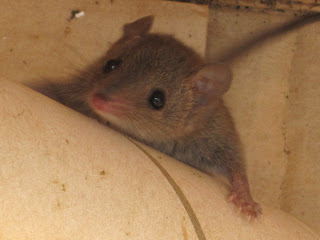 Sadly, because he is about mouse size, he is often killed before people realise he's a good guy.  I've now removed the cardboard and paper they thought would be great to nest in and so hopefully they've found a good spot back out in my scrubby bush.  There are many different types of antechinus living in Australia and I find them one of the cutest and most fascinating.  Amazing to think that this little fellow has the stamina for a six hour sex act and that all males are dead at the end of the two weeks, leaving the females to raise their young until the whole cycle begins again next breeding season, (August/September).  Some women might think this a perfect world!

Let me also take this opportunity to wish you all happy holidays!  I'm also taking a blogging break as I've taken on a three month role in the NSW Elections and so go full time from January 4th and I fear blogging may have to take a back seat again.  In the meantime check out some of my other posts, all listed by category under the header photograph.  Under Extras you'll find items such as the "Rules for being Human" and the "Lost Generation Palindrome".  In Environment you can read about two-headed fish, natural deficit disorder and saving money. If cooking is your thing try Recipes and the delights of healthy chocolate or mango ice cream.  Under Wild Life find all the links to Merrilyn, the eastern grey kangaroo and her family.  See the video of her latest joey, see "Big Boy" and read his story.  There are also fighting snakes, tawny frogmouths and many other wonders of the Australian bush and finally under Writing you can see how many of the BBC's Top 100 books you've read, or consider whether you might take on the challenge of novel writing in 2011.

Thank you to all those who've joined in my blogging journey in 2010.  Special thanks to those who've taken the time to leave a comment, you are much appreciated and I wish each and every one of you a fabulous 2011 - happy writing, reading and living!
Email ThisBlogThis!Share to TwitterShare to FacebookShare to Pinterest