Could YOU live without it?

It's Blog Action Day and this year the theme is water. Most of we bloggers are able to take water for granted. What if we couldn't? What if it was not so available? What if the way we are living is causing our water supplies to dry up?

Couldn't happen? Well we know that in some parts of the world people have had a long running issue with water:
- African women walk over 40 billion hours each year gathering water
- Nearly 38,000 children, under the age of 5, die from unsafe drinking water and unhygienic living conditions
- We've all heard of Darfur - many think this war was due, in part to water access.

Nothing you can do about that, you might well say. So what about your own water supply? Could it disappear? The book I've featured here from Amazon, "Water, the drop of life", was published as a companion to a television series. It's an older book now, published in 2001, but it contains many fascinating stories about water and the consequences of our tampering with nature. It was this book that bought the Aral Sea to my attention.

The Aral Sea, a huge inland lake that bisects the republics of Kazakhstan and Uzbekistan, had a thriving commercial fishing industry. It provided 60,000 people with jobs and 50,000 tons of fish were caught each year. Then it was decided that Russia's textile industry required more water, so water from the Aral Sea was diverted to the cotton fields of Uzbekistan.

Unlined and open ditches were used to move the water and so 80% was lost to evaporation. The Aral sea began to shrink and salinity increased. Half the Aral sea has now been lost and Mark Pitchers photo, taken on June 25th 2009, using a Nikon D300, in Qyzylorda, Kazakhstan says it all. 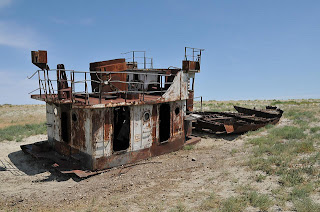 (See more of Mark Pitcher's amazing photography here )
The fishing industry died, and contaminated dust, from the more than 7,800 square miles, (20,000 square kilometres) of exposed sea floor, was carried by winds and has settled, not only on the homes and crops of local people but has settled on glaciers in the Himalayas, causing them to melt faster than they normally would and it has even been found in the blood of penguins in the Antarctic.

I don't think anyone stops to think of the far reaching consequences of disturbing our natural environment. Here in Australia, debate rages on how to restore the Murray River system to stop it dying forever and I hear people discussing the environment as if it were something separate to humans, as if we can decide whether we want to keep the environment or not. (Think about that one for a moment). There is a seemingly large river in northern New South Wales, called The Clarance river. Most people see it as the travel through the regional town of Grafton and it seems wide and abundant. So, some have suggested that it be piped to help restore the Murray. The problem is, the fresh water part of the Clarence isn't as wide and abundant and removing it would start a salinity increase, as much of the large flows seen are, in fact, tidal. We must learn the lessons of the Aral Sea and not make the same mistakes.

Though the Aral Sea will probably never fully recover, and people's lives have been destroyed, in this National Geographic Blog Post the progress of recovery is documented and though there is a long way to go, nature has an amazing ability to heal herself if we work with her, rather than against her.

For me this is the main message. We are a part of nature. There is enough documentation of the perils of simply using and trying to take control of nature for our own end. Let's start working with nature, respecting it and doing what we can to reduce our over-consumption of water.

I documented some of the water-saving methods I use here in a blog earlier this year called Precious Water.

So finally a video and link to the people who organised this whole Blog Action Day.  Check them out and join in the conversation.


Petitions by Change.org|Start a Petition »
Email ThisBlogThis!Share to TwitterShare to FacebookShare to Pinterest