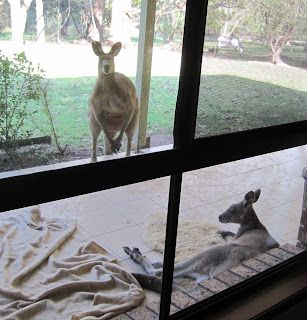 I took this shot from inside the house and you can see Merrilyn lying on the sheepskin and Big Boy just coming on to the patio.  Fortunately the males who live around here are usually very timid, however eastern grey males can be dangerous animals and have been known to kill dogs and injure people, so I wasn't venturing out with him in this aggressive mood. 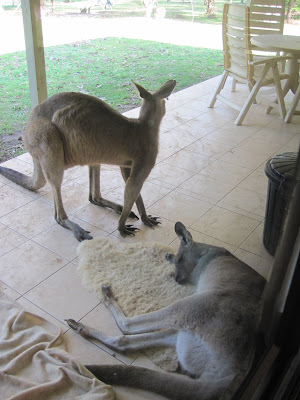 He came right onto the patio and stood guarding Merrilyn. As you can see she was sleeping, or trying to.  You can also see her pouch quite clearly in this shot.  She slept for a while longer and then moved off the patio with Big Boy in hot pursuit.  As I sat here working I saw them a few times as she went around the house and through the bush with him following.  I then saw her in the frog pond cooling off.  It may only be spring but we are expecting 29 degrees Celsius, (84.2 degrees f), here today and it seemed a ridiculous thing to be doing.

At about midday Merrilyn arrived back on the patio.  Wet from the frog pond, bedraggled, exhausted and bleeding from the cloaca. (The cloaca is the opening used for both elimination and reproduction).  She was a mess.  Big Boy was still with her but this time he opted to lie under the nearby trees about 10 metres away.  There was no sign, and still isn't, of her two at heel joeys, Tomasina and Rocky.

I do try not to interfere with nature, (the odd sheepskin on the patio aside), but my heart went out to her.  This roo is the nearest thing I have to a child.  I always keep goat pellets available for such emergencies and so gave her a handful in a bowl.  She ate about half and then collapsed back down on her sheepskin.  Thankfully Big Boy is also exhausted and sleeping under the trees and so she is gaining time to rest. The goat pellets mean she has some energy in her that would otherwise take quite some time and effort to gain by eating grass.

My only consolation is this is only the second time I have seen her in this condition.  It happened once before a couple of years ago.  On that occasion I took on the male and risked injury myself.  When she arrived the male tried to follow her onto the patio.  I was so angry at her state that instead of behaving like a human, I stood up tall, like another male roo and growled at him loudly.  Don't ask me why - I'm an idiot!  Of course he had always seen me as human until then, now I was acting like a rival.  He stood up himself, growled and then launched towards me.  I turned and made it into the house.  If he'd caught me his claws could rip me to shreds.  I recalled reading a story of a man struggling with a male eastern grey and I shivered!  It's part of a great read called "A Wild Life" and I've added an Amazon link here for anyone interested.

A Wild Life by Mare Carter

Merrilyn lay down and I wanted to keep him away from her.  My first thought was water and I grabbed the jug of drinking water and went outside and threw the water into his face.  He backed off immediately so I refilled and that kept him at bay for a while whilst I built barricades with the patio furniture in order to give her some rest.  (The crazy things we do!).  Anyway she was bleeding then as well and did survive it all and so I am hopeful she will again and at least Big Boy has opted not to follow her onto the patio for the moment.

What am I concerned about?  Infection for one thing.  She clearly has internal damage and any infection could kill her.  This isn't an animal that can be taken to a vet.    I also worry for her small pouch joey, though I have seen it move since she arrived back.  As always in these situations time will tell.  I'll keep you informed.  Ah the joy of living a bush life!
Email ThisBlogThis!Share to TwitterShare to FacebookShare to Pinterest