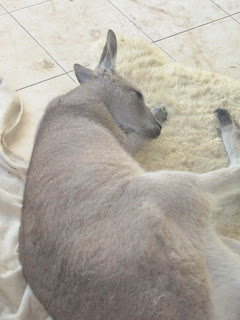 At least she was back, with her two at heel joeys and, though exhausted, the worst of the bleeding seemed to be over, and, as an added bonus, Big Boy was no where to be seen.  I also saw the pouch joey move, though we won't know if there is any damage there until he or she finally emerges fully from the pouch.

Merrilyn slept for four hours and then ate a cup full of pellets before leaving the patio, drinking at some water troughs I have at the other side of the house and then settling down on the grass there for more rest.  At times she was up and trying to clean herself and clearly her cloaca was painful and worrying her.

I was pleased with the fact the mating now seemed to be over, she was resting and fed and I thought we were now back on track for recovery.

Famous last words!  I was busy doing things inside the house when I noticed another male, equally as big as Big Boy, but not anywhere near as handsome, coming onto the patio.  Sorry no time for photos.  Merrilyn was pressed up against the door and I realised she really wanted in the house.  Not possible these days.  She used to live inside when she was a very tiny joey and we were renovating and the floors were concrete.  The polished floors would now see her doing Bambi impressions, though I gave it some thought in the seconds it took to get outside and throw water at this new male.  He bounced backwards but kept persisting and eventually Merrilyn left the patio and he went in hot pursuit.

I was heart broken as I didn't want her going through more, but was helpless to do anything.  Thankfully she has returned again.  The bleeding doesn't seem worse, however she is truly exhausted.  She is too tired to eat and her nervous system is insisting she stay on her feet as night is closing in, so she is standing on the patio, eyes closing and I just saw the new male go by again, this time chasing a much smaller female and I am sincerely hoping that it's not Tomasina as she is way too small to be mating yet.  Rocky is nearby, so at least I know she is safe and it seems the male is no longer interested in Merrilyn now he has done what he wanted to do.

All I can hope is that she comes through the night OK.  This is the time of predators and she is so exhausted I wonder what kind of flight she could make if attacked.  I'm out a good deal of tomorrow as well so won't be here for her as much as I'd like to be.  Thanks for the very supportive comments I've been receiving.

It's a very tough world out there for our wildlife, but as watch a glossy black cockatoo fly overhead on his way to roost and hear his quiet call, and I know that shortly I'll be cooking with the fresh basil, oregano and onions I picked from the vegie patch today, I know there is still plenty of beauty as well.
Email ThisBlogThis!Share to TwitterShare to FacebookShare to Pinterest