Hello again and thanks to everyone for sending warm wishes.  Happy to report that Merrilyn, Tomasina and Rocky are all here and OK.  Tomasina turned up yesterday morning, clearly untouched by the male kangaroo.  Either it wasn't her I saw him chasing, or he realised she was too young.  Sadly he was seen pursuing Old Strawb, quite an old roo that has been here ever since I arrived and who gained the name because she liked to dig up my strawberries,  (well not so much the strawberries, but the mulch around them.  When they move the mulch they find cool bits of earth to lie on.  Not good for young strawberry plants though so they are now within the fenced safety of the vegie patch.)

Poor Merrilyn.  When she arrived yesterday morning she was so tired she couldn't even eat.  She collapsed on her sheepskin and I spent the time before I had to go out swatting the many flies who wanted to land on her.  When I returned the male had clearly been there again and more blood was the result and she was just about a zombie.  When I woke at about 5am this morning I could see her on the grass not far away and again she was too tired to take any pellets - at least I was hoping it was too tired as the other option is illness.  Thankfully this afternoon she is looking brighter, much more rested and took a cupful of pellets happily.   All blood has now dried, but some is still there, which is a measure of how tired she is as she normally cleans things up fairly quickly.  Now we just have to wait and ensure there is no internal damage that creates infection.

Meanwhile I'm the one that has had the problems.  An itchiness and stinging in an awkward place, (mind your own), alerted me to the presence of a bush tick.  Fortunately, with the help of a mirror and a reasonably flexible body, I removed it.  It wasn't much bigger than a pin head, but a nasty lump resulted.  No big deal.  I laughed at myself in the mirror and ran my fingers through my hair and stopped when I felt something far more sinister. 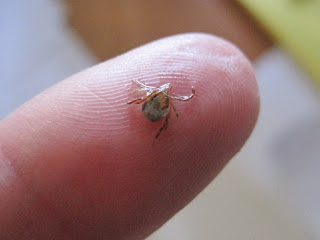 This is what is variously known as a hardback, shell back or paralysis tick.  This is the nasty thing that will kill a dog or cat if it is not located and treated for quickly.  It was burying itself in my head not far from my right ear.  Removal was by feel, which also means I removed quite a bit of hair and all, in all, was not pleasant.  However, as you can see, I managed to get it out in one piece, which you really want to do, leaving the head behind can create a few more problems.

So now I have a lump the size of an egg on the side of my head and the poison has worked it's way down the nerves to the back of my head.  It's painful, However I'll survive.  It's been a while since I've had one this big, but I know they do me no lasting damage.

As a point of interest they don't hurt the kangaroos at all.  (Well unless the roo is sick and over infested with them from being down too long and unable to groom.).  Here's a photo of some I took that fell off Merrilyn quite a while ago and this is what happens when they are left in to feast on the hosts' blood.  The coin is an Australian 5 cent piece. (The size of a dime, I think). 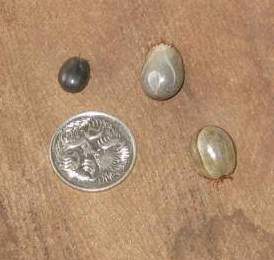 Well you have a special treat that's a perfect way to end this "Trouble in Paradise" series.  I just looked up from typing and I spotted a small pink head.  Yes Merrilyn's new joey has had it's first peek at the world, (well the first time I've seen it peeking, any way.)  This is Merrilyn's 7th joey and yet it is still such a thrill to see that little pink head for the first time.   Of course as soon as I went out, Merrilyn hopped over to see if I might have more food on offer, (a very good sign of her returning health), and I was afraid the little head would have disappeared, but it stayed out long enough to capture it for you, so here you are, meet joey number 7! 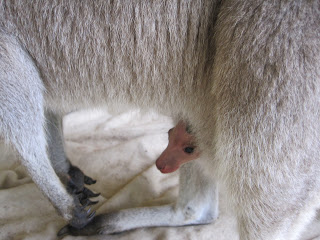 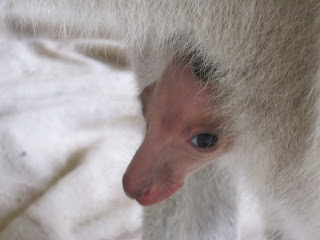 So now my headache is fading fast, I am very optimistic that Merrilyn will make a full recovery and this little joey looks as if he/she's survived it all too.  Paradise restored!
Email ThisBlogThis!Share to TwitterShare to FacebookShare to Pinterest