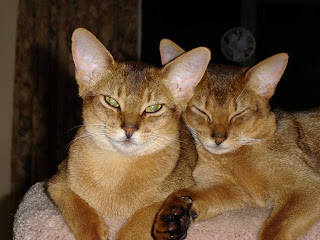 You briefly met Libby and Simba in my post The Big Hoppy Mouse and I thought it time I told you a little more.  Clearly they are cats, however Abyssinian cats are very dog like.  They greet me at the door when I come home, follow me around wherever I go and, even though they are rolling towards their sixth birthday,
they still love to play.  Abyssinians are thought to be amongst the first cats and they most likely come from Egypt.  (Named Abyssinian after the fellow who first showed them in London).  These are the cats they buried with the Pharaohs and they retain their sense of being royalty.  They are not gentile cats, they are more like bulldozers.  I recall reading about a Siamese who would wind herself gently through her owners porcelain figurines - here they would be bowled over like 10 pins! 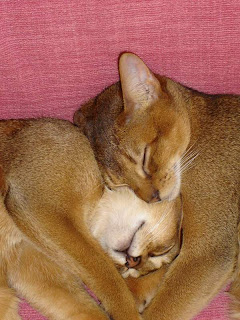 I chose Abyssinians for two reasons.  Firstly I wanted a totally indoor cat.  I'd seen the damage roaming cats do in the Australian bush and I didn't want to be responsible for any more of that. (I had cats as a child and probably wiped out several species of birds and gliders where I lived then.), plus we have a number of animals here that would take a cat out, including some of the snakes, goannas and wild dogs.  So I asked around and several friends recommended Siamese.  I went to look at a litter and the same breeder had a new litter of Abyssinians and I just fell in love! 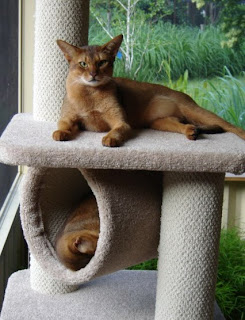 Though they can't venture into the great outdoors, they do have the run of the house and a sunroom.  They have several towers to climb and even their own skywalk. 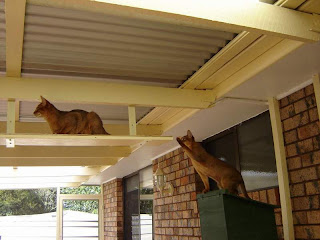 To say they are characters would be an understatement and I look forward to sharing their adventures with you.  If you haven't read The Big Hoppy Mouse, it shows the relationship between these two, well particular Simba, and Merrilyn, the kangaroo.
Email ThisBlogThis!Share to TwitterShare to FacebookShare to Pinterest