One of the things I love about living in the bush is the chance to see the animals and birds I share it with.  Last night I was lucky enough to spot a tawny frogmouth as I arrived home.  It is also known as the mopoke as people thought this was the night bird that made the "mopoke" call that can be heard in the Australian bush, but that noise is actually made by the boobook or spotted owl.  The tawny frogmouth is found right across Australia and some even survive in our cities parks.  They fly silently, as do all night hunters, and they have the amazing ability to reshape themselves to look like part of the tree.  Sadly we lose quite a few on the road as they see prey in headlights and swoop down to grab it right in the path of the oncoming vehicle.

I'm still very much the amateur photographer, but this tawny was so close I had to have a go. 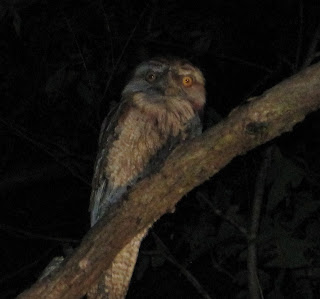 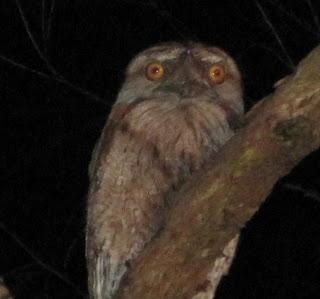 I don't like flashing at them or lighting them up for long so these photos don't really do the bird justice so I thought I'd go and find a photo under creative commons licence so you would gain a better idea and I found this superb shot by Wardie 44B on Flickr. 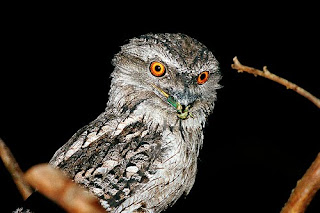 The following link will take you to the photo and all of Wardie44Bs fantastic photos.  Tawny Frogmouth and Snack by Wardie44B on Flickr Wardie44B also explains how he took the shot and what equipment he used.

So if you are in an area of bush at night, especially open eucalypt woodland, keep your eyes open for a tawny frogmouth acting like a branch and looking out for a tasty morsel to catch.
Email ThisBlogThis!Share to TwitterShare to FacebookShare to Pinterest