My favourite thing is meeting the other residents of this piece of scrubby bush and lately we've had a regular possum visitor in the trees near the house. This is a Common Brushtail Possum I saw a few nights ago. 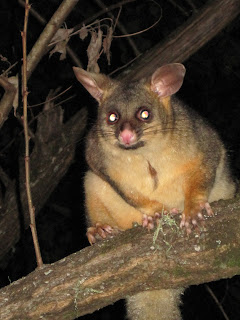 This is the possum most often seen in Australia, and it is still surviving, even
in some city suburbs.  It is a nocturnal creature and spends its days sleeping in a hollow tree or fallen log.  You might recall my post Logs have life inside showing several typical hollow logs that might be home to possums.  In the cities, as the hollow log option has been removed, they will take up residence in a garage with an open window or a roof space if they can find a way in. They grow to cat size, and they are marsupials, having live young and carrying them in pouches for the first four to five months of their lives.  Once the young possum grows it will move from the pouch to clinging to its mother's back for a further one to two months as she moves around.
We spotted this guy in the car headlights when we came home late one evening.  I took photos from a long distance away, thinking he would race up the tree, but he sat patiently watching me as I crept closer.  He did eventually head higher up the tree and I put a small piece of banana up in a branch fork to reward him for his bravery and left him to come and enjoy it.  They can become quite tame if fed, and I'll pop a small piece of fruit out from time to time, especially through the cold winter.  However I do not want him to become reliant on me or he'll starve when I take a holiday, and often the diet we fed animals isn't the diet they need for maximum health.
They do much of their travelling on the ground, which leaves them susceptible to predation by foxes, roaming dogs and feral cats.  Their natural predators are carpet pythons, (see my post Fighting snakes) and goannas. (Goanna photo in Compost making extraordinaire)  Possums climb using very sharp claws, that you can clearly see in the photo.  They are territorial and so the weaned young must move out to other areas to establish their own territory and this is why retaining areas of bush and corridors between them is vital for species survival. 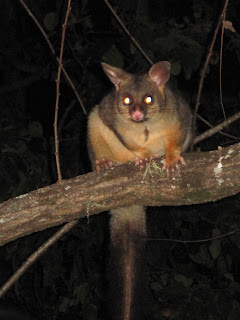 You can see their long tail in this photo and it is moderately prehensile, in other words it can be moved like a limb and curled around branches to assist in balance.  They generally live on fruit and leave and were once thought to be entirely vegetarian, but it has since been discovered that they will take eggs from time to time.  Nectar laden flowers are often a favourite as you can see from this photo of a young possum, I had in care, chomping into wattle flowers. 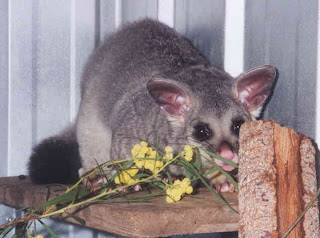 In New Zealand, the possum, introduced from Australia in 1840, has become a pest, as it has no predators.  But sadly here its habitat is contracting and many populations have already disappeared and others are becoming vulnerable.  They are gorgeous to see and I hope the preservation of my piece of scrubby bush will help the local group to survive.
Email ThisBlogThis!Share to TwitterShare to FacebookShare to Pinterest