Sometimes it's hard to keep the natural and unnatural apart in my life.  I spent a few years as a wildlife carer, and any regular readers of this blog will know that Merrilyn, an eastern grey kangaroo I raised from a furless joey, still visits regularly and sees this place as home.  I also have two indoor cats.  They are Abyssinian, very dog like cats and they have the run of the house and a huge sunroom.  They are indoor only for two reasons: 1) They would kill as much as possible if they were allowed out. 2) They'd be killed quickly as they don't understand the dangers of brown snakes and goannas.  They are my dog substitutes as you can't have an indoor dog and as I love my wild visitors, (even roos I haven't raised come close to the house), and don't want them to be chased away.

Strange as it might seem, Simba, the aby and Merrilyn seem to have connected.  I tried to discourage it, as I don't want any kangaroo to think a cat is a friend as there are feral cats out there who might hurt if approached.  Still when it's summer and all solid doors are open, it's not possible if they want to say hello and Merrilyn doesn't go near any other humans so I'm thinking she won't go near any other cats.  They also don't say hi very often, but I have managed a few snaps when it has happened and I thought you might enjoy them. 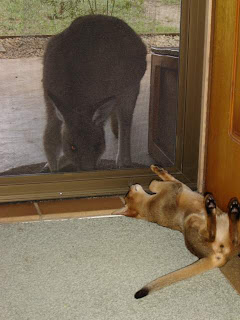 Mum the big hoppy mouse is at the door! 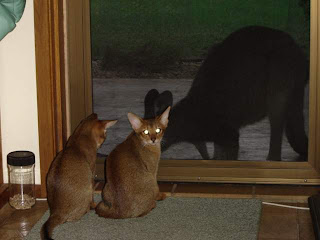 Can she come in and play? 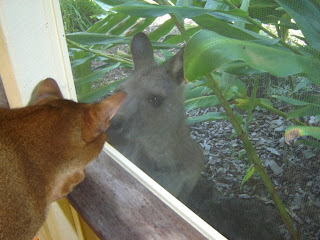 What's your name?
Just gotta love the animals!
Email ThisBlogThis!Share to TwitterShare to FacebookShare to Pinterest