Poo, Paw Prints and other evidence of Visitors

Lately we've been having more visitors and some we would rather not see at all.  I'm talking night time visitors of the furry variety.  You can have fun with this yourself by putting down a sand trap, (you're only trapping foot prints) and by obtaining a good tracks and scats, (poo) field guide.  For me that's Barbara Triggs book "Tracks, Scats and Other Traces."  Now don't be put off if you live in a city - you'll be amazed what passes by.

So I suggested to Lovely that we add a sand rap, just out from our bedroom door.  Now we keep this door open, even in winter, (well just a crack in winter - we love fresh air but we aren't too ridiculous).  It does have a solid fly screen, so nothing can get in.  I think Lovely was a bit dubious about putting it so close to where we would be and he was amazed at the first results. 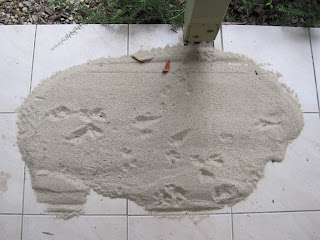 This piece of sand, just flattened out across the tiles is about 60cm x 30cm (2feet x 1 foot).  I've tried to take some close up shots but they just aren't as clear.  So starting at the top.
The tiny prints to the right of the leaves are most likely rattus rattus, the common black rat. (Well I didn't say you'd like everything you'd find).  The prints in the middle are most likely to be a northern brown bandicoot - one of our favourites so lovely to see.  There are some bird prints mixed in there too.  However the shock to the system sits right down the bottom in the middle.  Here's a close up: 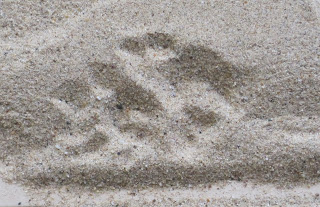 A dog or a fox, it isn't 100% sure which, has managed to step onto the edge of the sand trap.  He could well have been after the bandicoot.  It is a sad fact that in Australia we lose thousands of animals each year to foxes, wild dogs and wandering domestic dogs.  So we hunted around to find further evidence of the visitors. 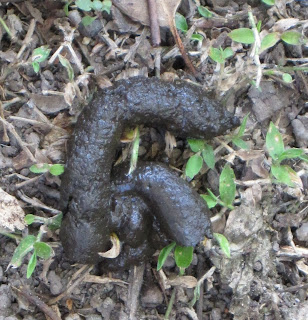 Fresh fox poo.  So we have instigated an eradication program.  I'm always sad when we do this as the European fox is a magnificent creatures, and it isn't the foxes fault.  Some dimwit bought them to Australia to hunt, with no consideration for native animals.   However there is no choice if we are to preserve the wildlife that belongs here.  We hope the bandicoot survived that night.  We often see one when we come hoe late at night and when we walk around the property the evidence of them burrowing down to seek out he grubs they so enjoy is plentiful.  Here's a link that will tell you more.
http://www.australianwildlife.org/Wildlife-and-Ecosystems/Wildlife-Profiles/Mammals/Northern-Brown-Bandicoot.aspx

So what do you think you might find if you put down a sand trap?
Email ThisBlogThis!Share to TwitterShare to FacebookShare to Pinterest