My father was a keen photographer and I recently found these fascinating photos of two carpet pythons fighting on our old shed roof.  I'm told that the combatants are male and fights usually occur in spring time.  Carpet pythons, (morelia spilota), also known as diamond pythons, are fairly common in Australia, covering at least half the continent.  They live in a wide range of habitats from rain forest to semi- arid areas.  On average they grow to about 2 metres in length.  They aren't venomous, they are constrictors, squeezing their prey to death.  They are valuable to have around as they keep the rodent population under control. 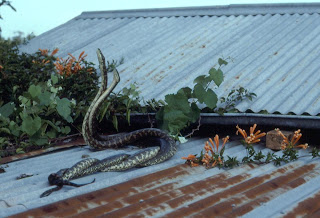 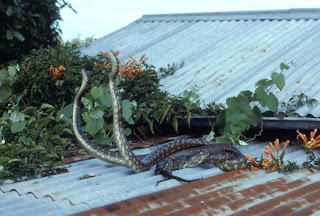 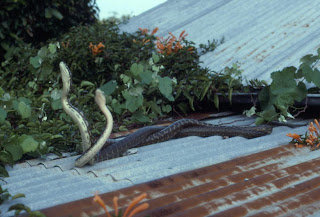 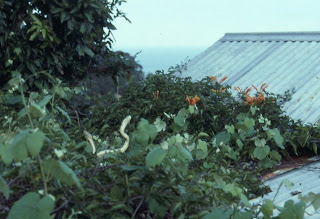 The snakes move from the shed roof into the tree 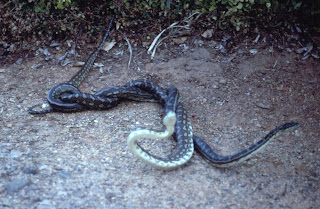 From the tree they fall to the ground and one is less than pleased by the attention from the camera.
I spent a few years working in wildlife care and it saddened me the number of people who would call us for a snake identification, after they had killed the snake.  Snakes play a valuable roll in our eco system, and though they may not be our favourite creatures, I imagine the feeling is mutual.  We are of no interest to snakes and, unless we interfere with them, the chances of our being bitten is almost non existent.  Nature also loathes a vacuum, so kill one snake and another will move in, possibly something more dangerous.  I was told by a local snake expert that if you kill, or relocate a carpet snake, a red-bellied black snake (venomous) moves in, kill the black and it's replaced by a brown snake (more venomous than the red-bellied black and more aggressive).  Also, as people have found before, the rodent population can explode. So keep your distance, enjoy their beauty and thank them for the service they perform
Email ThisBlogThis!Share to TwitterShare to FacebookShare to Pinterest