Well at last some one has coined a phrase for something we've been thinking about for a long time.  I know when I moved back to the bush I gained a new peace and happiness, and Lovely, who only really moved into the bush last year has said the same.  He went further to say that he believes much of the unhappiness and "missing" people feel is because they are now totally disconnected from nature.  So imagine our surprise and delight to hear a radio interview on ABC this morning with Richard Louv who has written a book called "Last Child in the Woods".  It talks about the very real problems that are growing
as a result of our disconnect with nature, particularly in children.    Richard is part of a movement encouraging people to spend some of their time back in nature, even if that is only in their own back yard by putting up a bird bath or a bat box or some native plants that will attract in the birds, but better still go out and walk in the bush. (Please leave the dog at home).

My good friend Tracey is currently mourning the loss of several shrubs and trees from her yard as they add new extensions.  That sense of loss is real and we often dismiss these feelings and don't realise what they might mean for our health in later years.    When I was a kid playing in the dirt was allowed and I used to head up to a local pond and collect tadpoles and delight in watching them grow from little fish like creatures with enormous bulbous heads to tiny frogs when they would then be returned to the pond.  Could be why I had an enourmous frog pond put in here right where I can view it from my desk.  I love it.  We recently had to pave the bottom of it though.  Well we have kangaroos here, as you know, and they love the frog pond too, to drink.  As the rain dropped away last year they had to walk further and fiurther in to find the water and sadly their claws broke through the liner and suddenly the frog pond was permanently a puddle!  The solution, fix about 150 holes and then find cheap pavers to ensure it would never happen again.  Here's a recent photo of Tomasina enjoying the new paving: 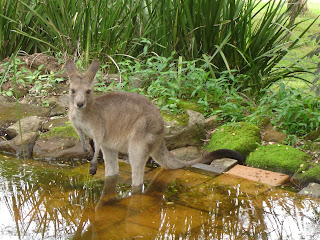 Hard to have nature-deficit disorder when you can see this from a window!  Add to this walking up my driveway and picking fresh persimmons to eat with breakfast and I just know this is one disorder I'll never be diagnosed with. 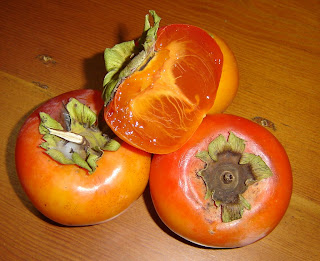 If you've never had a persimmon, find one.  Always eat them with a teaspoon when they are VERY soft.  They are delicious.  Easy to grow too, but need to be netted from the birds who love them too!
So, go find yourself a tadpole, a persimmon or a tree to hug so you too can avoid nature-deficit disorder and if you want to know more about Richard Louv, his book and work go to:
http://richardlouv.com/
Email ThisBlogThis!Share to TwitterShare to FacebookShare to Pinterest