So Lovely has now really become the compost making champion of the world.  Well he had thought so before, with some seven huge bays being organised, plus a tumbler in the veggie patch.  He weighed and measured proportions of organic material to dry material and even created a goanna proof bin for the kitchen scraps to ferment in.  This last bin needed as birds, and any other passers by,  were tempted to help themselves to yesterday's kitchen scraps meaning they didn't stay there long enough to compost.  Once he created the bin idea, he just had to keep the goanna out of it and a piece of our home grown bamboo did the trick beautifully! 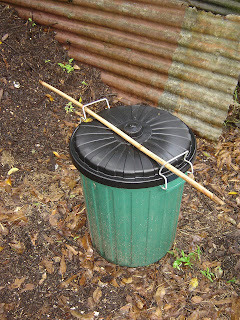 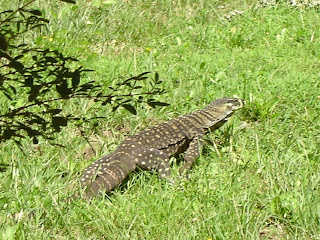 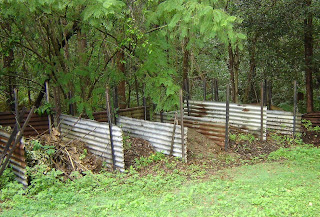 Some of the seven compost bays.  Each with compost at a different stage of development.
Now all was going well until we visited the local Organic Producers Organisation where Lovely discovered that their President is another world expert on compost making.  He declared that our missing ingredient was manure - yes poo, dung, droppings, of the animal variety of course, and most usually sheep or cow.  Not only that but each bin needed at least 40% manure to ensure it reaches a heat sufficient to decompose seeds and even pine cones, (not that we have any of those).   Now we try hard to provide everything from our property where we can and pride ourselves on our level of self-sufficiency.  Once upon a time,
when I did lots of wildlife care and had several joeys around,  I used to collect all the roo poo and put it in the compost, but now it's fairly scattered and would take quite some time to collect.

Lovely is not easily deterred and so asks our neighbour, who runs beef cattle, if he can collect some of his cow poo.  The neighbour, a lovely bloke but a farmer of the old school, looks at Lovely with the kindness of a man who thinks he's talking to a boy who is mentally defective and says yes.  Two problems.  Firstly to go in when the cows aren't about - they are curious creatures and given the number of calves produced there must be a bull somewhere.  Second problem - the fence is electrified.

So picture this, (sorry I didn't capture it on film), a grown man heads off up the driveway with his wheelbarrow and poo collecting bucket.  He wades through the long grass outside the cow paddock, praying the brown snakes have tucked themselves away somewhere else for the winter, and eyes the electrified fence.  Anyone remember the limbo?  Lovely goes one better.  After throwing the bucket over the fence he lies on his back and wriggles his way beneath the fence.  (The things we do for our compost!)

He returns triumphant.  First barrow filled and dropped into a bay.  He heads off again in the near dark and drizzling rain, (that's why there aren't any photos...).  On his return he is elated and declares he is a man who needs physical exercise to be happy and that it was wonderful standing surrounded by cow pats with the mist coming off the river and night time closing in.  You've just gotta love him! 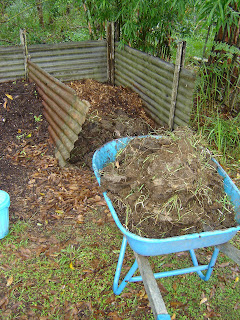 Nothing like a barrow load of cow poo!
I reckon another 20 loads and we'll have enough!
Email ThisBlogThis!Share to TwitterShare to FacebookShare to Pinterest